This is the final installation in a series about building a browser-based live looper:

*Insert "it's done" Frodo meme.* I'm quite pleased to announce that Loop Supreme is live to the world! I mean, it has been for a while now, but now it is live and complete. Of course, it's not 100% complete (nothing ever is), but I'm satisfied with the primary features for now. I wanted to recap the past 5-6 weeks I've spent working on it, reflect on what went well, what didn't go well, and anything I found remarkable after finishing the project.

First, let's talk about what is new since last time

For the most part, implementing these last features was great validation for a lot of the choices I made in this project. Adding dark mode support was ridiculously easy and took only 10 lines of code, thanks to Tailwind. (Seriously, you can count the changes.)

If I had spent a little more time planning at the beginning of the project, I could have added a service worker automatically using create-react-app. However, adding it after the fact with the workbox-cli package was extremely straightforward too.

The most ambitious feature that I added - the ability to record a live performance - was a really fun confirmation that I learned something valuable about the Web Audio API. Whereas most of this project has felt like stumbling through the darkness, I felt confident and clear-headed while implementing this feature. Partly that is because it built on existing patterns I've established already, and partly it is because I already understood how to make it work without having to read a lot of documentation. It also showed that the design patterns I'm using aren't horrible, since adding a node to the audio graph didn't break anything and worked on the first try.

Adding these new features was fun and shockingly quick, which is exactly what I wanted.

I wanted to take some time to reflect on the project holistically since it has been my primary time suck outside of work for the past several weeks.

I was able to complete a functional version of this app in about 5-6 weeks, which is just about the length I was hoping for in this project. I specifically did not set an explicit goal of how long it would take when I started

I created the repo on November 3rd, and I'm drafting this post on December 10th. By the time all is said and done, it might be 6 weeks, but that still seems totally reasonable for a functional PWA built as a side project.

I'm really pleased with the final set of features included in Loop Supreme. Clearly, there are a few items in the roadmap that didn't get finished, but I realized as I was playing with it that these were less important to me. I may add them in the future, or not. I'm really pleased that the app can record audio to multiple tracks, sync to a clock, and export the recorded audio. That is the core of what I was trying to accomplish, and it all works basically as expected!

I was very pleased with the technology I chose to use. Of all the front end frameworks, I'm most familiar with React, so it was a natural choice. Using create-react-app was seamless and delightful; I still haven't ejected and it works great. Tailwind was a really fun CSS library to use, I can see why it is so popular.

For hosting, Cloudflare has been extremely easy to use, particularly with a custom domain. I am considering moving my personal site from GitHub Pages to Cloudflare Pages just because of how easy it was. Plus there are built-in page analytics, and a lot of controls in the dashboard. They also automatically create preview deployments that never expire. Overall it was a pleasure to use and I'd choose them again without a doubt.

I considered using GitHub Projects to manage this, but ended up just using a massive checklist in a markdown file. I'm so happy I did. The additional overhead of managing tasks in a Project would have been tedious and not extremely useful. For a single-contributor project, I'm very happy I chose the most lightweight project management possible.

It took me several iterations to figure out how to properly deploy to production using wrangler, the Cloudflare CLI package. I thought it was working twice before, but both times realized that I missed something important. From what I can tell, the winning arguments are --env production --branch main.

I hold nothing against the Cloudflare team for this; the wrangler CLI clearly states that the pages commands are in beta. If I were to do it again, I would probably just use the built-in CI offered through the Cloudflare dashboard.

On the whole, I really loved using Tailwind. I thought it was easy to use, well-documented, and provided lots of flexibility for customization.

However, I found myself visiting the Tailwind docs constantly. Is flex-wrap declared with flex-wrap or just wrap? Is display: none declared with display-none or hidden or none? Is color declared with text-[color-name] or font-[color-name]? I'm sure this would improve over time if I used Tailwind every day, but it made me wish for an offline version of their docs that I could reference more quickly. Perhaps there is a VSCode plugin or something that would achieve what I'm looking for, I didn't search too hard.

"Definition of done" was ambiguous

It was a little hard to know when to stop. Eventually, it became a "gut feeling" kind of thing. Since I was making this app for my own musical interests, I kept using it and noticing a bunch of things that I'd want to change before releasing it. This led to scope creep that I didn't plan for. It wasn't exactly a problem since I didn't have a strict timeline, but for future side projects I think I'd spend a little bit more planning time up front.

Conversely, this project was intentionally ambiguous because I truly didn't even know if it was going to be possible. While it may not have been possible to define "done" at the onset of the project, I think it would have been helpful to spend a little time after the basic proof-of-concept was working to decide at what point the project would be considered complete.

I'm struggling to think of anything that truly went wrong in this project. Of all the difficulties I encountered, almost all of them were anticipated - for example, spending time learning how to integrate the Web Audio API with React. I'd say that's a successful project!

I had a bunch of fun with this project and now I'm excited to go make some music! Go check out the final product at loopsupreme.com!

First "back of the envelope" sketch 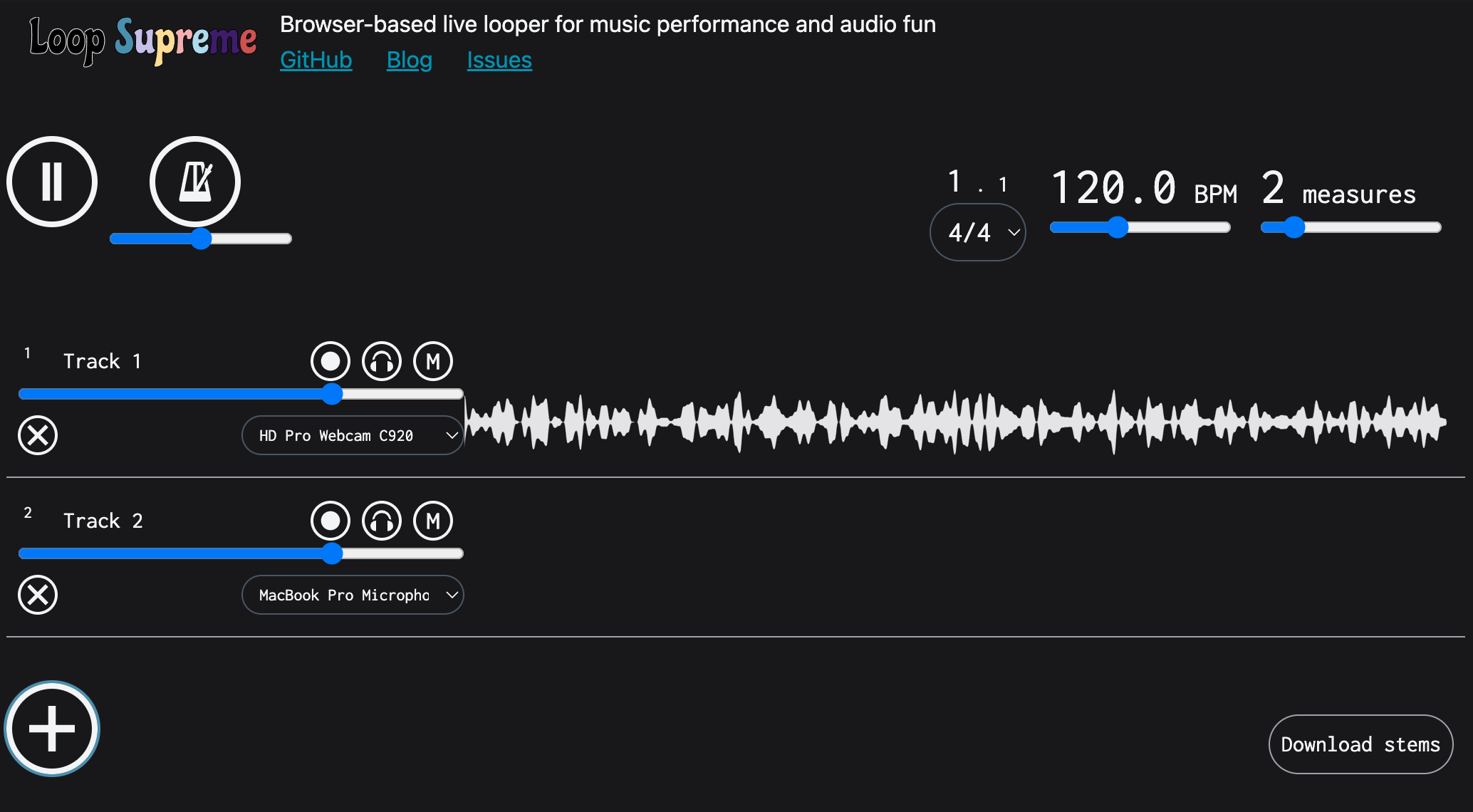